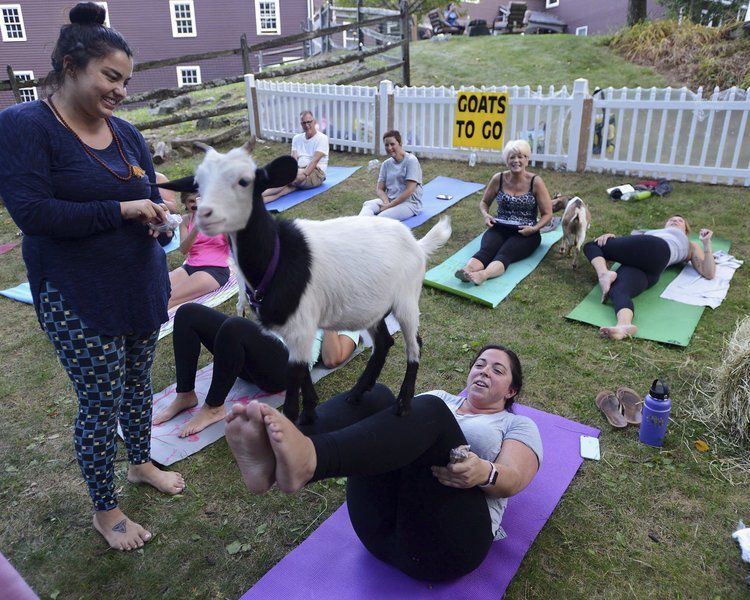 GEORGETOWN — It was an idyllic setting for an evening yoga session.

Golden rays from the setting sun filtered through gaps in the trees. Participants arrayed their yoga mats in rows on a grassy patch overlooking a pond. The stretches began in near-silence; the serenity punctuated only by the instructor’s softly spoken directions and the chirping of crickets in the background.

That is, until the goats came out.

The peaceful yoga session quickly dissolved into a chorus of gasps and giggles as more than a dozen baby goats were set free from their pen and began wandering about the yoga mats, ready and eager to make new friends with the humans who were just as excited to meet them.

It was far from your average yoga class; this was goat yoga, the latest twist on a centuries-old wellness practice that’s becoming a trend throughout the region.

Great Rock Farm in Georgetown has capitalized on the recent popularity of goats – in particular, baby goats – by holding goat yoga sessions throughout the summer on the farm.

The session on Wednesday evening doubled as a fundraiser to benefit the MSPCA at Nevins Farm in Methuen. The sold-out class drew about 40 participants who were just as enthusiastic about play time with the young farm animals as they were about raising $850 for the Ashton’s Hope Fund, which provides medical care to MSPCA horses and farm animals being cared for at Nevins Farm.

“It was goats with a side of yoga,” said participant Susan O’Bell.

But she didn’t mind. “They just make you smile,” she said.

Michelle Aulson of Great Rock Farm coordinated the event. After a number of births earlier this year, the family-run farm had a plethora of goats, many of them twins or triplets. With so many young “kids,” they decided to give goat yoga a try.

“It was just something I always wanted to do,” she said.

The initial interest was so high that the farm quickly expanded the classes. Now, three instructors rotate sessions at the farm, with about 12 to 15 young goats that join in each time.

“The goats like it because they’re social,” Aulson said.

Some goats are friendlier than others – they “really like to jump on people and get right in there,” Aulson said. Others are a bit more shy and stay lower to the ground, wandering in search of treats while stopping to cuddle their human friends.

Sometimes, they poop. Other times, they fall over. Aulson said some of the goats are full or partial “fainting goats” – a breed that’s prone to falling over due to a muscular condition.

With goat yoga proving a success at the farm, Aulson reached out to the MSPCA in June to set up an event.

“I would love to donate time to working there, but everything’s busy,” said Aulson, who works near Nevins Farm in Methuen. “Since I’m busy doing goat yoga, I figured that would be a great fundraiser.”

They posted the class online with a 40-person cap. It filled up in just a few hours.

Both Aulson and the MSPCA were thrilled by the response.

“I think it’s a great event to open our hearts with yoga practice and have the community open their hearts for what we do at the MSPCA,” said 11-year MSPCA volunteer Chris Morency, who represented the organization at the event.

Nevins Farm community outreach coordinator Julia Pesek said the MSPCA was “deeply grateful” to the folks at Great Rock Farm and the yoga participants for their donations.

“The MSPCA receives no state, federal or local funding and relies on donor support to meet the needs of animals in our community,” Pesek said, adding that the funds raised would help support the care of “less fortunate goats,” and other farm animals, too.

‘I’m here for the goats’

After some brief introductions about the farm and the MSPCA on Wednesday night, instructor Christina Nice of Amesbury began a guided yoga session, directing humans and goats alike with ease. A friend of the Aulsons, Nice didn’t pass up the opportunity when the family called earlier this year asking her to lead some of the goat yoga classes.

“I grew up on a farm, so it was an easy yes,” she said. “I’m so glad I did, because it was really a special thing. It makes people so happy.”

Nice spent much of the first half hour wandering among the mats calling out poses, while her pupils for the evening learned that the baby goats weren’t kidding around about jumping on top of them, especially when there were treats up for grabs.

At one point, Nice called out an instruction: “We’re going to move into a neutral table-top pose.”

Rosie Villers and Christine Olesen turned to look at each other: “If one jumps on you, I’ll take a photo,” Villers said.

A few minutes later, one did. And later, another.

“It feels like someone walking on your back, but also it’s a cute little animal,” Villers said.

Villers, of Sandown, New Hampshire, and Olesen, of Wakefield, both work for Bulger Veterinary Hospital in North Andover. Villers also fosters animals for the MSPCA. She once fostered a chihuahua who needed major surgery – the money for which came from the same Ashton’s Hope Fund she was supporting through the yoga class. The surgery was successful, and Olesen adopted the dog.

The two friends were more than happy to play with goats to support a good cause on Wednesday, especially one that’s close to their hearts.

Halfway across the row of yoga mats was Courtney Doyle, who appeared to be a fan favorite for the herd of baby goats; one in particular was all too willing to test just how long she could hold certain poses as it perched atop her legs, munching on treats. Doyle, of Roslindale, took the fawning in stride as she moved through the poses with O’Bell, of Wellesley, her coworker at the MSPCA in Boston.

“It’s my first goat yoga experience and I think I will be doing it as often as possible,” Doyle said afterward.

For Andover couple Mary and Matt Demas, the decision to try goat yoga was easy – they like yoga, and they like animals.

“This seemed like a great way to support the MSPCA,” Mary Demas said.

Matt Demas agreed, noting how novel the experience was. 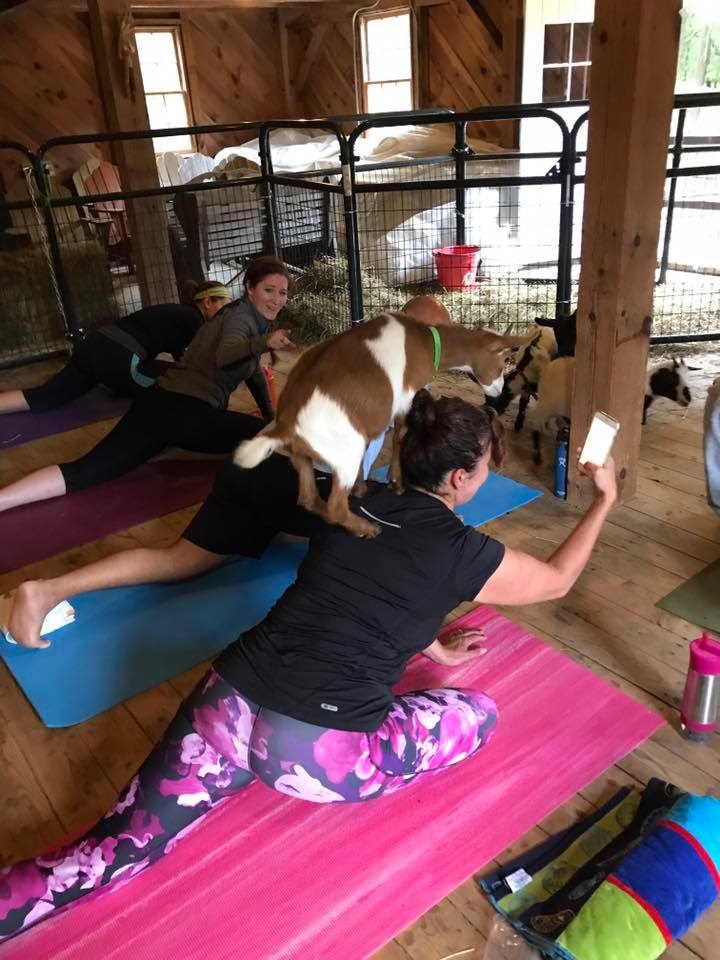 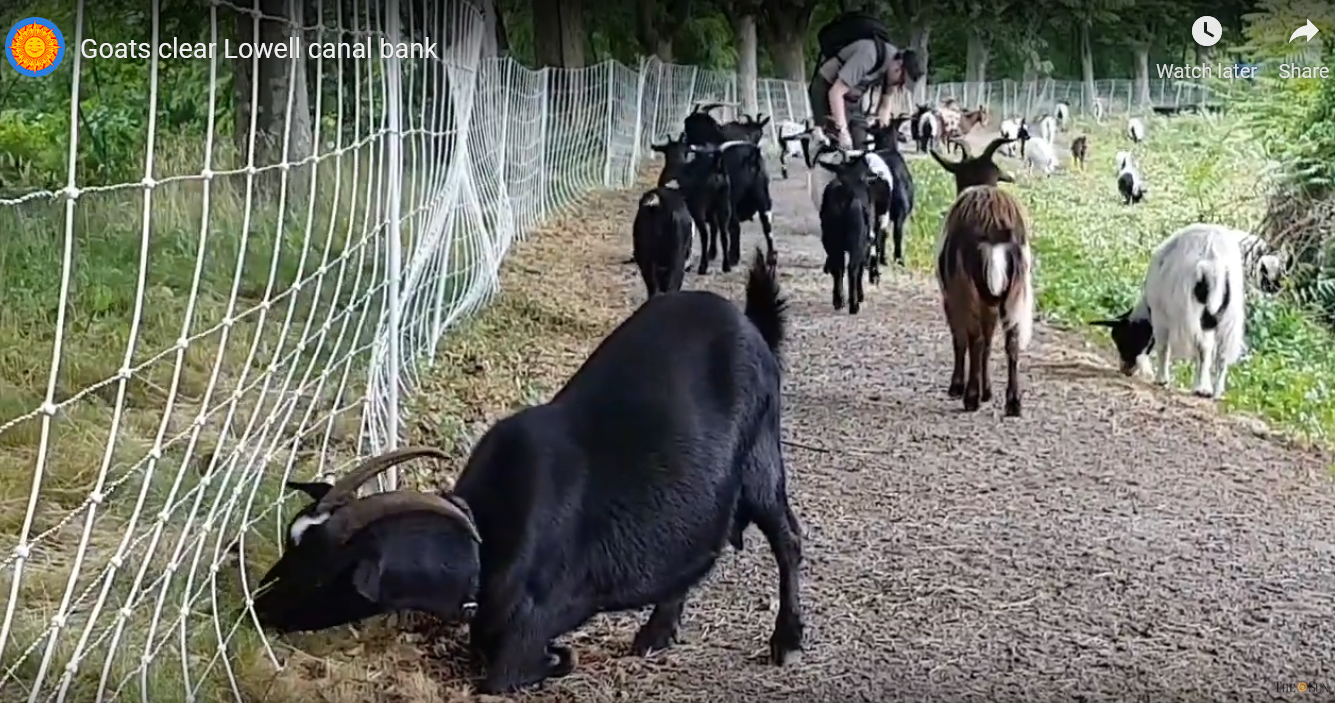 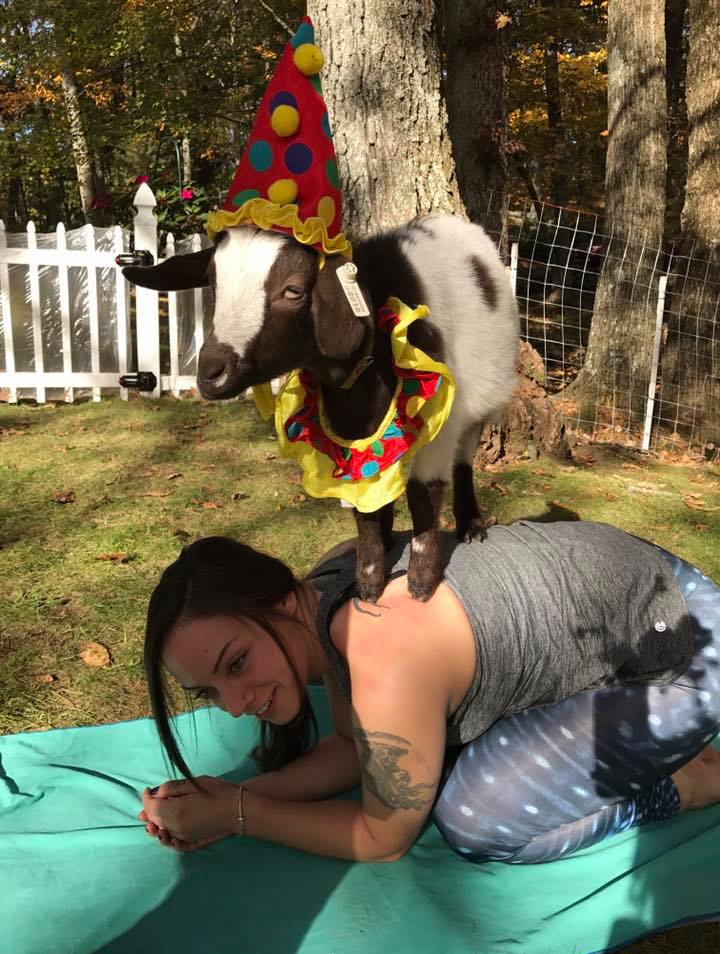 Trick or Bleat: Georgetown’s Goats to Go ends season with Halloween fun IN THE NEWS

Goats & Giggles at Pechakucha Portsmouth IN THE NEWS 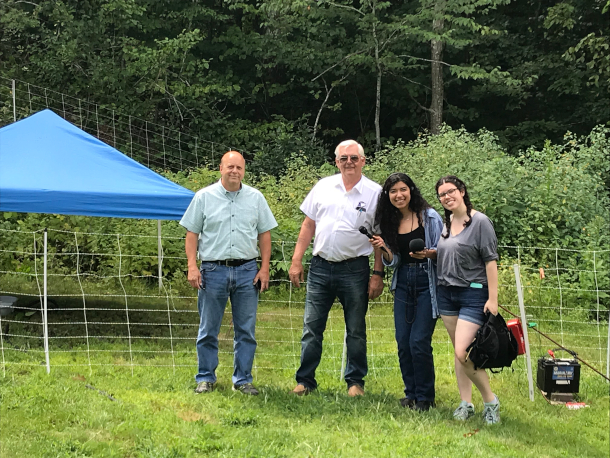 Living on Earth Interview with Goats To Go IN THE NEWS